The Tyranny of the Elevator-Hijacking-Neighbor-Kids 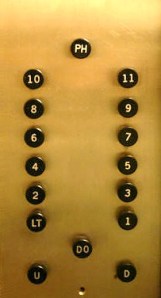 Until I was in second grade, we lived in a 1920’s gothic revival building on Chicago’s north side.  Faux gargoyles and heraldic symbols were molded into the plaster facade where a pair of wrought iron lanterns flanked the heavy carved wood doors, each with a gigantic brass handle.

The theme carried into the lobby which was intended to replicate Ye Olde English Castle with the attendant decorating cliches: faux wood beams across the ceiling, plaster walls designed to look like they were made of stone,  dimly lit chandeliers suspended from heavy chains. To me it was a windowless, grim dungeon.  I imagined terrible things happened there, and the building engineer relished scaring us kids with tales of torture and dismemberment,  encouraging our fears to keep us in line.

The most difficult part of my day came when I returned from school and had to ride in the small, coffin-like elevator. It’s dark, varnished walls shuddered when the brass doors slammed shut with a bang, trapping the occupants on a loud, fussy ride that on occasion jolted to an abrupt stop between floors for no apparent reason.  Terrified passengers resorted to fruitlessly pressing the alarm button until someone, hearing the commotion, left the comfort of their apartment to press the elevator button in their hallway, or the nasty box mysteriously regained strength to continue to it’s destination.

To make matters worse, we lived on the tenth floor, and because I was extremely short for my age, I couldn’t reach the “10” button.  This wasn’t a problem in the mornings when I simply needed to press “1” to head for the lobby, but the afternoons were another story.

There were about a dozen kids who lived in our building, and six of us rode on the same school bus. At the end of our day we’d grab our lunch boxes, pile out of the bus and race through the lobby to the elevator.

Living on the highest floor in our little group meant I was the last stop on the ride upstairs. It also meant I had to rely on the kindness of my fellow kid-neighbors to push the “10” button.  Sometimes they felt charitable.  Most of the time I was forced to walk alone up the dark, poorly lit stairwell to reach our apartment: an equally distasteful alternative.  More than once I had to step over the snoring cleaning lady from 4A who visited the liquor cabinet while her employers were at work, and passed out on the landing a couple of floors below us.

After I’d endured my limit of fright and humiliation, I refused to get on the elevator after school.  Instead, I lingered in the vestibule waiting for all of my little friends to leave, before pressing the buzzer on the intercom to alert my mother that I was ready for her to retrieve me from the lobby.

This went on for what seemed like an eternity, until the glorious afternoon when my mother met me at the school bus.  After everyone had left, she led me into the elevator and told me to press the “Door Open” button, which happened to be the lowest button on the control panel. Instantly, the doors slammed shut and we headed straight to the tenth floor.

It turned out my mother charmed the Otis repairman into re-wiring the buttons while he was repairing the elevator that morning.  She warned me not to tell anybody about this arrangement or the building management might be prompted to return the wiring to it’s original state.

Of course it was impossible to keep my  “Door Open” button a secret, and in less than a day, it was the talk of the building. I was pleased because it made my friends jealous and proved to be a reliable source of amusement.

At least once a day I could hear the voice of a bewildered visitor in our hallway exclaiming, “I don’t understand it! I pushed the “Door Open” button and here we are on the tenth floor!”

After we moved away the “Door Open” button was the catalyst for a feud between the new tenants who rented our old apartment and the family that lived in the penthouse.  Both had young children who needed their freedom.

2 Responses to The Tyranny of the Elevator-Hijacking-Neighbor-Kids

This site uses Akismet to reduce spam. Learn how your comment data is processed.